How much does it cost to build a billboard?

How much does it cost to build a billboard?

This question comes up a lot when people think of the beginning stages of billboard construction. And, if you’re planning on doing this with a smaller team, it’s good to be aware of what you may need to fish out. The key factors influencing the cost of building an outdoor billboard are the size of the billboard, material for the structure, the configuration of the supports, and the height of the structure. The second most important cost factor is whether the billboard will be single or double-faced. It completely depends on the type of billboard that you are constructing.

The cost of putting up a billboard ranges from a couple thousand dollars to over a million. A small wooden billboard is the cheapest to erect. Bigger billboards and more elaborate billboards up the price. The most expensive of all is an LED billboard. These are digital billboards that can change the ad display every few seconds, using digital technology to project the most eye-catching displays. Before deciding where to build and for what dimensions to build around, ask yourself what you’re planning to buy. 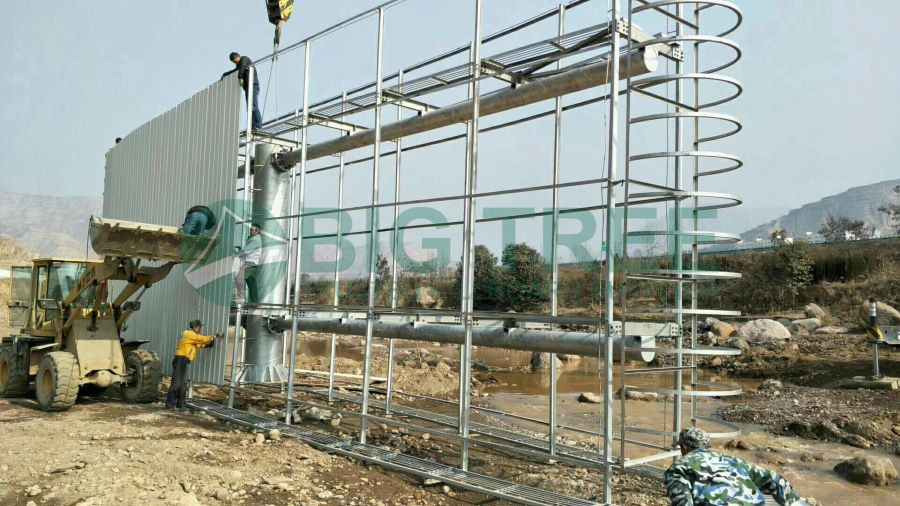 The cheapest signs to construct are made of wood

Wooden billboards can be found all over the world. The industry began with wooden construction, and much of it has returned to those early roots. To build a wooden sign, all you need are telephone poles, some 2” x 4”s and some plywood. You put the poles in the ground, nail 2”x 4” “stringers” horizontally to connect the telephone poles, and then nail sheets of plywood on top of the stringers, to create the advertising face. Then you wrap the vinyl advertisement over that fact.

The cost for double-faced wooden billboards is about twice the price of single-faced ones. Single-faced boards can have angled supports at the rear while the structure for double-faced boards must be smooth on both sides. While these sizes vary, the approximate cost of building the 12 feet high billboard, with the top about 25 feet above the ground and the width ranging from 25 to 48 feet is between $9,000-40,000.

Traditionally, wooden signs do not contain catwalks (ledges you walk around on), ladders or led billboard lights. They are stripped to the bone, to provide the lowest cost possible. Since they are made of 4’ x 8’ plywood, the signs are normally either 8’ or 12’ high by a number divisible by 4 wide (maybe 24’ to 32’ side).

But sometimes metal is cheap, too

The smallest steel monopole sign can cost as little as the wooden billboard. Its name is the “8-sheet” because, in the old days, it took 8 sheets of wallpaper to cover it. It is around 5’ x 12’ in size, and is nothing more than a single steel pole and two metal frames and faces attached directly to that pole. These signs were extremely popular in the 1970s, as a way to advertise cigarettes and liquor in urban environments. They can also be wrapped in vinyl, and have no lights, catwalks or ladders.

They’re supported by one steel post, either in the middle or at one end. Single-faced steel monopole billboards are expensive compared to the wooden ones. Typical face dimensions range from 12 by 25 feet to 20 by 50 feet. The 40 feet high billboards cost around $20,000 to build the smaller boards and $90,000 for the largest. If you were to place the pole at one end instead of the middle, it requires more strength and adds up in the total cost.

Overall, multipost boards are slightly less expensive than monopole billboards for smaller boards that stand 40 feet high or less. Supporting the billboard with several steel posts increases the cost for supports but decreases the cost of the board structure, since it is supported at several places. Boards with heights ranging from 10 to 12 feet and lengths from 22 to 50 feet range in cost from $35,00 to $77,000. This is slightly less in price than the corresponding monopole boards.

Now the prices go up substantially

Next up the pyramid are the 30-sheet billboards, which are roughly 12’ x 24’ in size. These are also known as “posters”, as they are normally covered in paper instead of vinyl. These are one of the workhorses of the outdoor industry, with thousands of such signs in most every major city in the U.S. They can be attached to wooden poles, too, but normally it’s steel I-beams or steel monopoles. They are simple, effective and come in kit form. 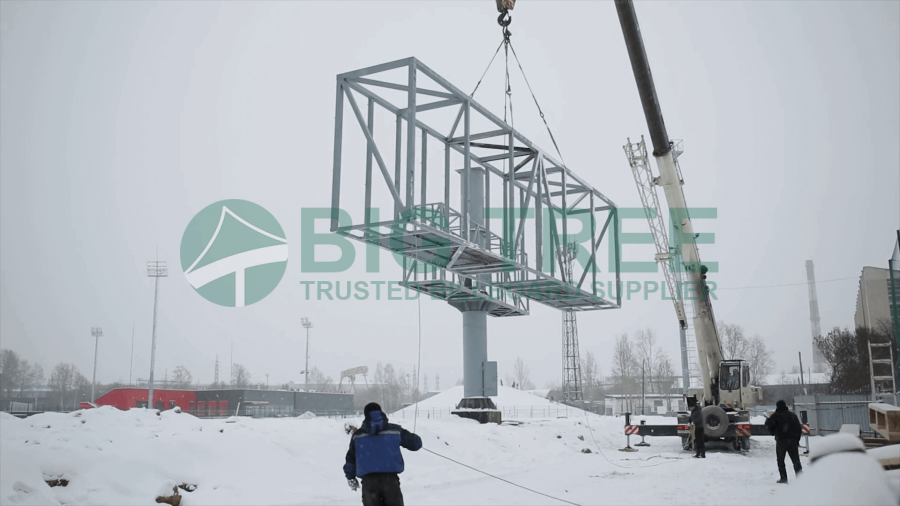 These boards have an advantage in that they can be easily arranged in a V-shape format that allows for better visibility from both directions and, also, is more stable of a construction. With smaller supports and frames, double-faced multipost steel boards are also slightly less expensive than their monopole versions. These boards typically stand 40 feet high and have dimensions ranging from 12-by-25 feet to 14-by-48 feet for each face. The costs pertaining to these range from $20,000 to $90,000.

Monopoles are the Cadillac of the industry—and are priced accordingly

Once you shift into the 14’ x 48’ – or even its cousin the 10’ 6” x 36’ – steel monopole structure, the price jumps significantly. These signs are the most difficult to build, weigh the most, and require the most sophisticated engineering. So how much are they? A big portion of that depends on what the configuration of the sign is, as monopoles come in everything from center-mount to full-flag, and back-to-back to tri-face. They can be over 100’ high if needed. They are chock full of catwalks and ladders, and lights are the norm.

But that’s still not the most expensive

The most expensive billboards in the world are the ones that contain digital advertisements – also known as LED. These type of signs often change advertisers every 8 seconds or so, and are highly complicated and require a large amount of electricity. So you are basically taking a monopole structure, and adding the most expensive advertisement delivery system on earth. These types of billboards can run, for two LED faces, up to $1 million.

Now you know the answer

Billboards can range in price from $1,000 to $1 million. That’s a pretty big gap. It’s 100% based on the type of sign you are building, from the simplistic wooden billboard to the ultra-sophisticated LED. Many billboard companies operate a range of signs, from the cheapest to the most expensive. The important point is to make sure that you select the correct sign structure for your application.

Where can you get more information?

Billboard construction companies will need direction from you on the type of billboard to build. There are many types on the menu, and you need to make sure that you have a handle on what it costs to put up a billboard so that it meets your budget. Otherwise, you will spend too much, or install a sign that is ineffectual and hard to rent a Billboard. Of course, you can also request and get custom billboards.

BIG TREE are among the leading manufacturers of outdoor billboard in the China. Being in the business for two decades, the company offers a wide range of products including bus shelters, outdoor billboards, street furniture, led display billboard, light box,etc. Till now our products have been successfully exported to over 35 countries.

One Reply to “How much does it cost to build a billboard?”